Remember the last time you had to restart your computer to get rid of some problem it was having? It could be the same with your mobile phone or automobiles like your bike or car as well as more complex equipment like an aircraft. A system reset is thus considered the first remedy to avoid such problems. A good sound sleep is the same system restart a human body needs to get rid of small or discomfort. Having a little headache, stomach ache, dizziness, exhaustion, etc will always have sleep as its first remedial trial and its overwhelming success is a little hint to how much our body needs a sound sleep.

Vastu shastra is a traditional concept associated with bringing balance between the different elements element that surround us and using that positive energy to benefit humans. Vastu effects every part of the buildings that we call home or office. The bedroom which is the idle location for a good sound sleep is also guided by different laws of vastu shastra. 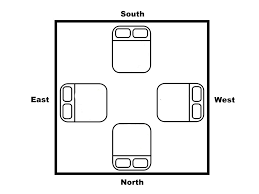 The most basic guidelines are based on the direction towards which your bed is faced or how you lie when you sleep:-

Aiden Engineering is providing BIG DISCOUNT on our Interior Design Service. Do check it out here
https://www.aidenengineering.com/2020/05/03/re-design-you-room/